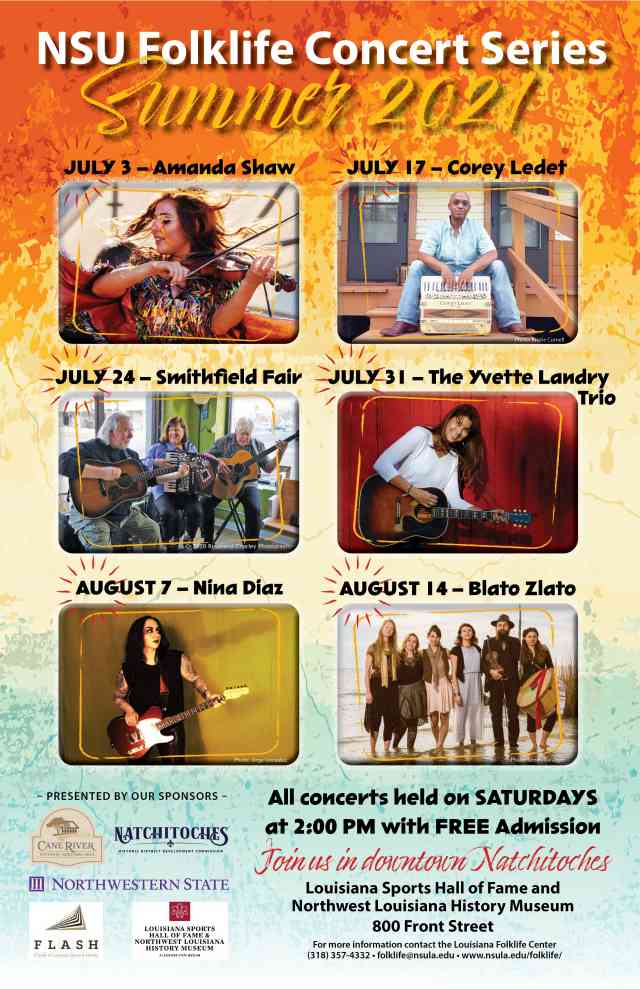 NATCHITOCHES – Balkan music group Blato Zlato will perform at the Louisiana Sports Hall of Fame and Northwest Louisiana History Museum at 800 Front Street in downtown Natchitoches on Saturday, August 14 at 2 p.m. The performance is part of the 2021 NSU Folklife Concert Series, a series of six Saturday concerts in July and August.  The concerts highlight different folk musical traditions with a 45-minute music set followed by interviews with the musicians and an audience Q&A. Admission is free and open to the general public.  In addition to the music performances, folk artists will demonstrate and sell traditional crafts.

Blato Zlato (“Swamp Gold” in Bulgarian) is a New Orleans-based Balkan band that puts a contemporary Louisiana twist on traditional folk music from Eastern Europe. The band performs dark, improvisational arrangements with particular focus on Bulgarian folk songs, three-part vocal harmonies and driving, odd-metered rhythms. Hailed as a band with “galactic ambitions” by The New Orleans Advocate, Blato Zlato features musicians from Europe and the United States with a collective goal to produce meaningful cultural and musical bridges between the two continents. In 2019, Blato Zlato released their anticipated sophomore album, “In The Wake,” following their acclaimed 2017 releases of their debut album “Swamp Gold” and the limited-edition “EP Voyage.” They have toured both within the U.S. on the East and West Coasts as well as in Europe. This will be their first time performing in Natchitoches.

Support for the NSU Folklife Concert Series is provided by grants from the Cane River National Heritage Area, Inc. and the Natchitoches Historic District Development Commission.

For more information, call the Louisiana Folklife Center at (318) 357-4332, email folklife@nsula.edu, or go to louisianafolklife.nsula.edu.